OSIRIS theatre’s (then ISIS theatre) first official performance, Message of bones – A story of life’s power (Luiden viesti – tarina elämän voimasta), had its premiere in Stoa, Helsinki. OSIRIS theater’s director Liisa Isotalo was in charge of the composition and execution.

Work began in 1996 by inviting Charles Lawrence, a carrier and teacher of the tradition of several Native American tribes (including coast salish, blackfoot and hopi), to lead the workshop. The workshop explored the genealogy of archaic culture in different cultures. In the workshop met musicians, dancers and theater members from different cultures. They brought their own stories and their own genetic information into a common story. Stories were drawn from the gypsy culture of Finland, the indigenous culture of North America, the Haitian tradition, the Karelian cultural tradition of Finland and the indigenous culture of Senegal. 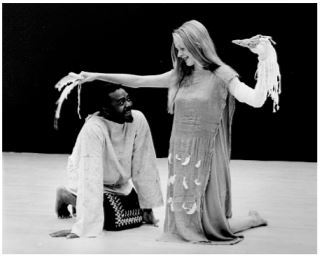 Since its founding workshops, the OSIRIS Theater has studied the significance of indigenous culture for modern people in its performance activities (e.g. Legend of Birth 2009 – 2011, Birth – a story of the birth of the universe 2008, Tsunamika – A girl who searched for the sun (2008-2010) and Over the dark Tuoni river 2012).

The events were carried out at Pikkukoski riverbank during the autumn equinox, as the sun was setting and the moon was rising.

With the theater, there were almost one hundred local people making the events happen: scouts, parishioners, writers, singers, canoeists etc. In the year 1999 the yoik to sun was sung by Sanna Kurki-Suonio and Angelin tytöt.

Legend of Birth project was a three-year collaboration project between professional Finnish artists and the international artist community in Auroville, India. The project was based on studying and performing of birth myths in folklore, both in Finland and Auroville, India. Also a record, Birth (Synty) was produced. Although there are different birth myths, wanting to understand where we originate unites nations. If we all have a similar perception on the birth of the world, what is our perception on the end of the world?

Birth – A story of the birth of the universe (Synty – Tarina maailmankaikkeuden synnystä) was a performance based on the birth myths in Finnish folklore. It was performed in Media Centre Lume.

A musical drama for the whole family about a tsunami wave, love and friendship. Tsunamika performance has been produced in Finnish, English, Tamil and Arabic. It was performed in English and Tamil in India on the 10th anniversary of the tsunami. 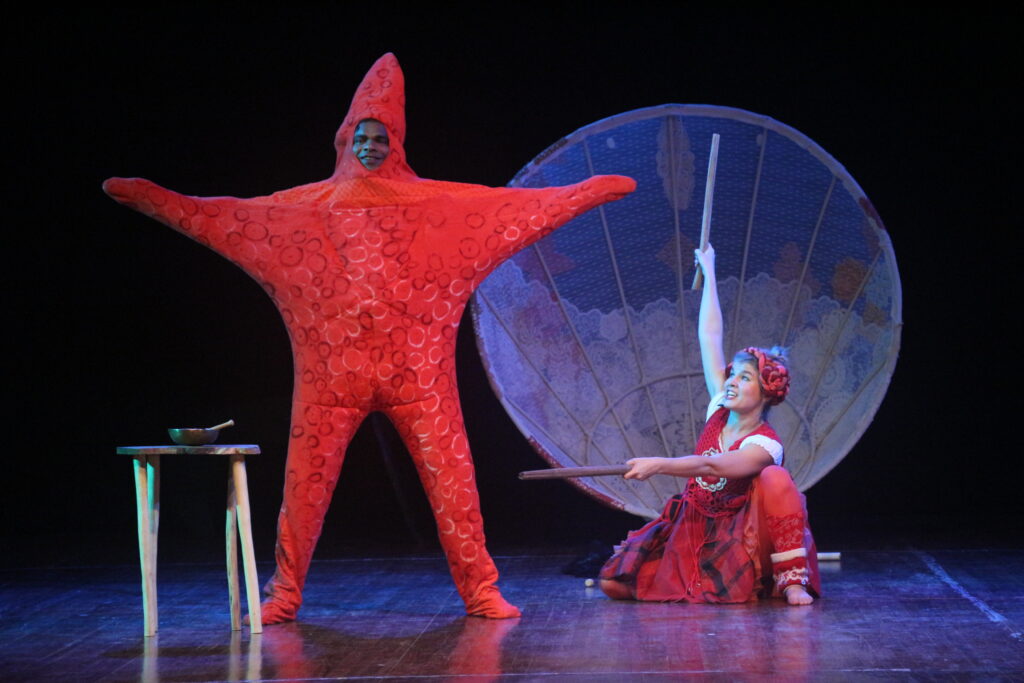 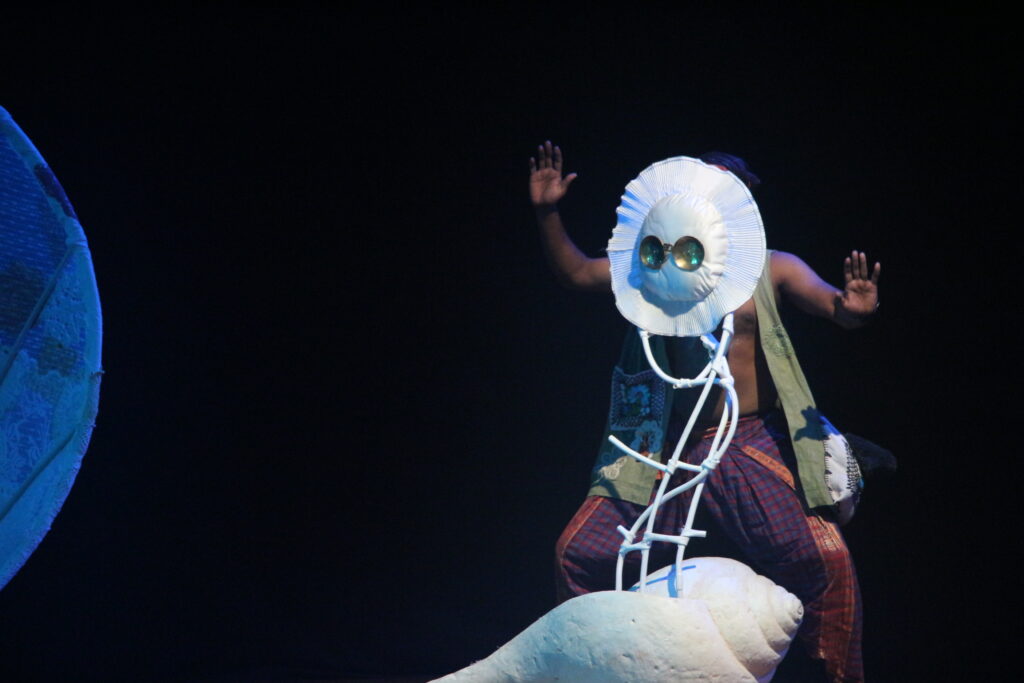 ISIS Trio published the Birth (Synty) album in September 2011. The album consists of compositions of Juha Kujanpää from the stage performance Birth and a concert held in Auroville India. Performers on the album: Juha Kujanpää, Suvi Isotalo, Kaisa Siirala and Riikka Siirala.

HS. was a tribute to the life and art of Helene Schjerfbeck. The dance drama was produced in honor of Schjerfbeck’s 150th birthday. The performance was executed by an international multi-arts working group. Its premiere was carried out in collaboration with Ateneum Hall. The performance combined different age groups and several different arts. HS. has toured in e.g. Tammisaari, Mänttä (Serlachius museum), Frankfurt Germany and Aarhus Denmark. 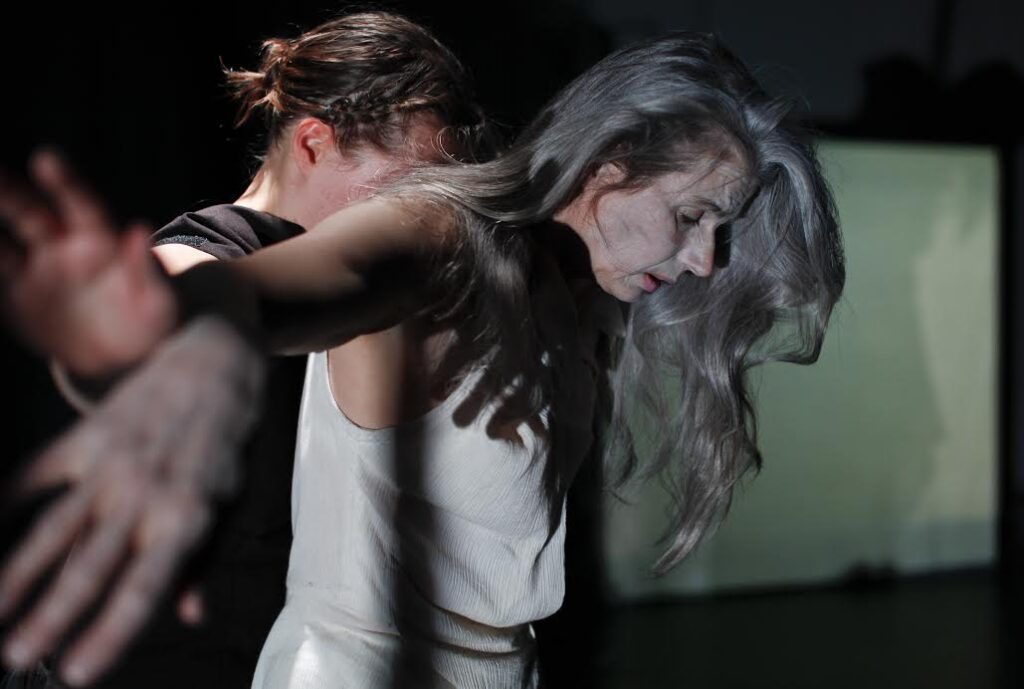 Over the dark Tuoni river (Yli tumman tuonen virran), a dance performance about the mythical boundary between life and death, was performed in Galleria Augusta, Suomenlinna and in the old mine of Outokumpu. The soundscape, music and dance of the performance drew from Finnish folklore, which was filtered through modern culture of death. The performative journey, which resembled a retreat, was executed by three dancers, a live musician and a light artist. 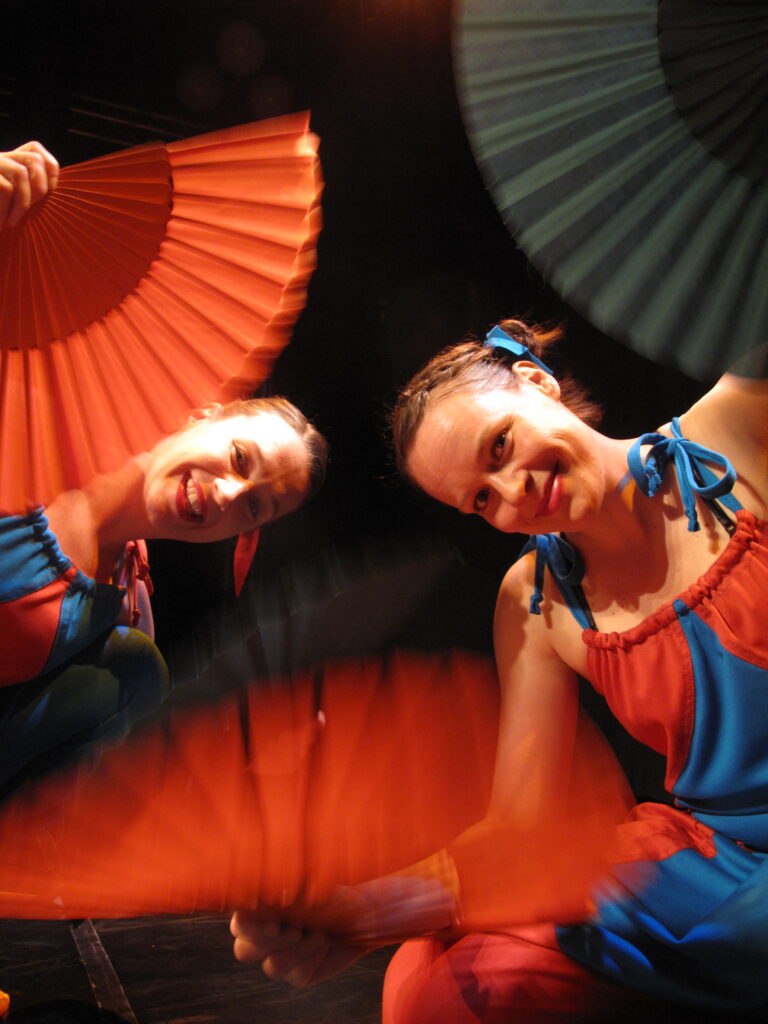 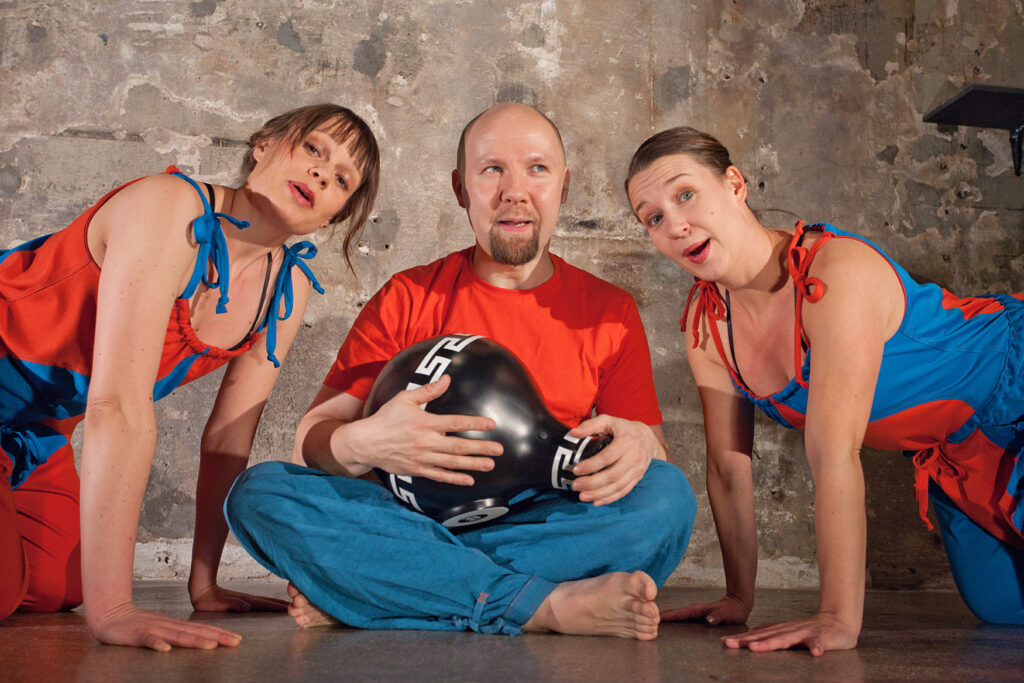 – Sounds of whinnying and clatter of hooves!

This cheerful, eclectic and engaging dance performance is a country and western adventure involving two cowboys and their rhythmic horses. This western inspired performance is created by composed music, live vocals and dance movement. It creates a bizarre yet welcoming world of its own where the audience is encouraged to participate and become part of the country adventure. The performance is for children from 2 to 6 years old. 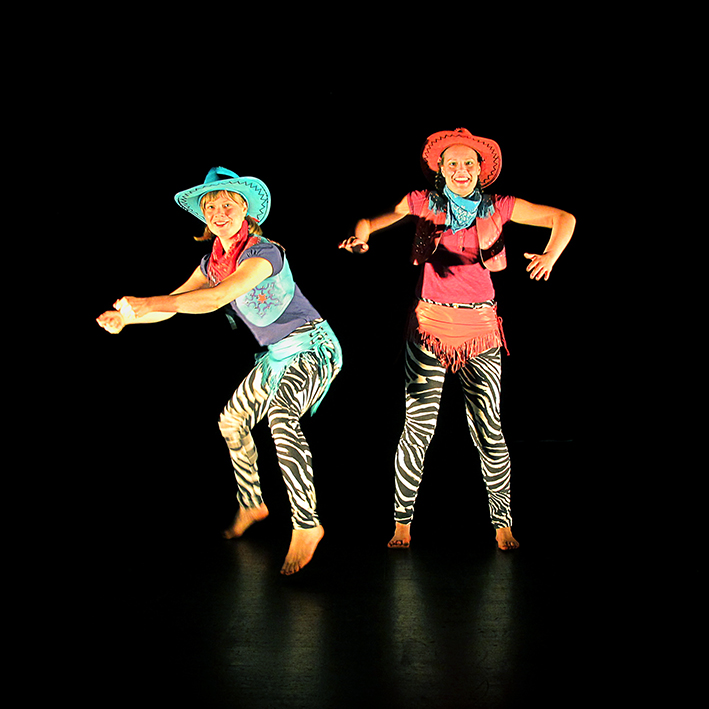 12th of May 2015 ISIS theatre changed its name to OSIRIS theatre.

BabySauna takes you to the world of the original Finnish sauna and its magical sounds, scents, rhythms and colors. Nonverbal BabySauna suits families with babies as well as multi-cultural audiences. BabySauna is Loiske Ensemble’s most performed piece and it has toured with more than hundred performances around the world. The performance toured in asylum seekers’ reception centres around Finland during the refugee crisis of 2016 and has visited The Helsinki City Theatre with a series of performances. 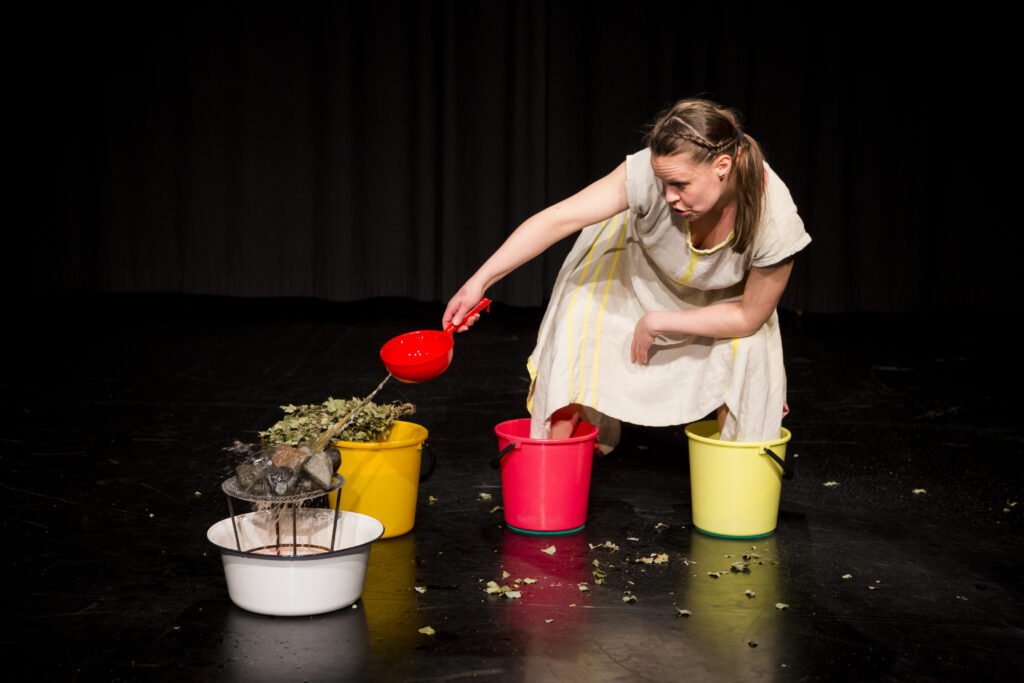 Wild and free is an unpredictable and funny street show for two women, who dance with buckets on their feet and play with whisks and shredders. Wild and free shows different kinds of escapes from everyday routines and the roles of femininity.

Wild and free was played in Helsinki and North Karelia, mostly on market platforms and other outdoor spaces. 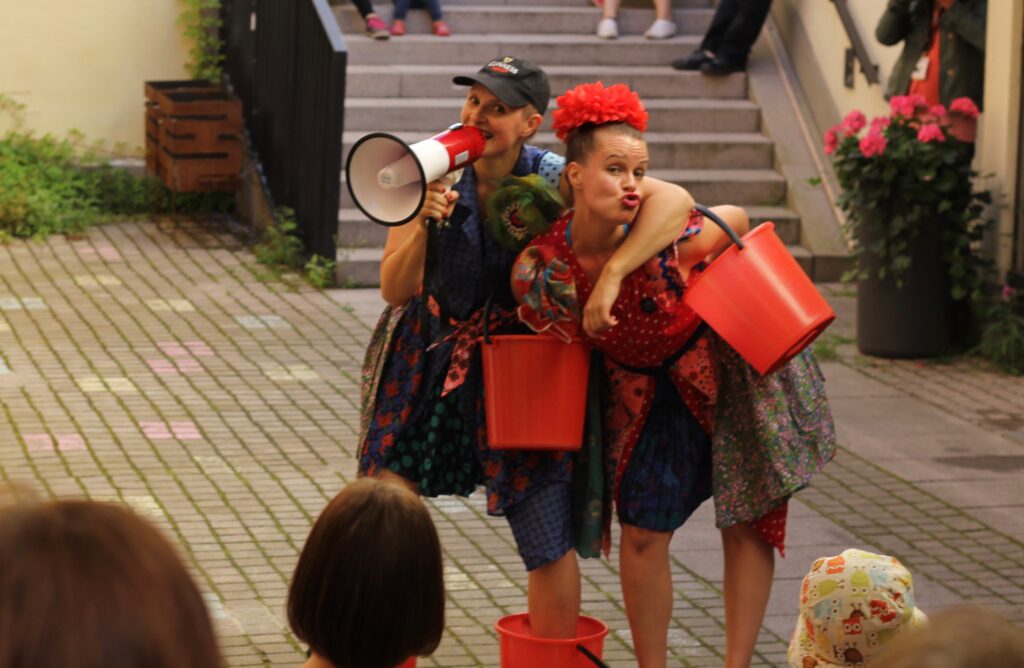 A dance performance and a dance for babies.

BabyTango combines a performance experience and a shared dance session for babies and their companions. Tango is a feeling – it is about listening, a shared flow of movement, surrendering, leading and being led. BabyTango deals with the relationship between the baby and the parent.

BabyTango is performed also in care communities for audiences of babies and the elderly. In these performances the aim is to facilitate meetings between generations.

With the means of table puppetry On the Journey (Matkalla kotiin) tells the story of Iraqi refugees, arriving in Finland. It was at first only performed in private homes and living rooms, to secure the safety of the performers, but the next year it was also performed in high schools. The performance was unusually well and impressively received by the young audiences. We managed to break attitudes and boundaries and open discussion between refugees and the Finnish people.

On the journey site 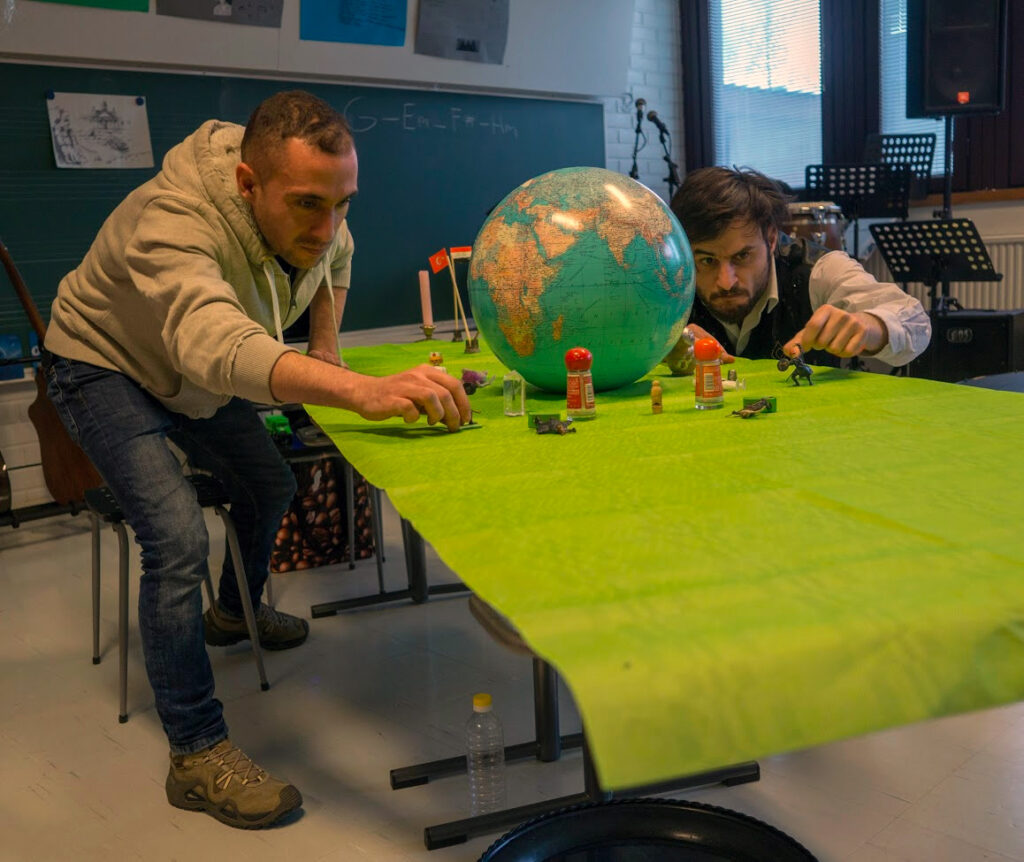 Osiris Ensemble: Cracks of the Island (2018)

Cracks of the Island is a journey with music and dance on the island of Vallisaari. It is a performance, but also a communal walk, where nature, man and art communicate in a truly unique environment. Because of the performance, the island and the sea around it appear in a totally new light.

Cracks of the Island was performed in August 2018. The work group included three dancers and two musicians. Viewers walked in silence with the performance along an outdoor route.

Cracks of the Island site 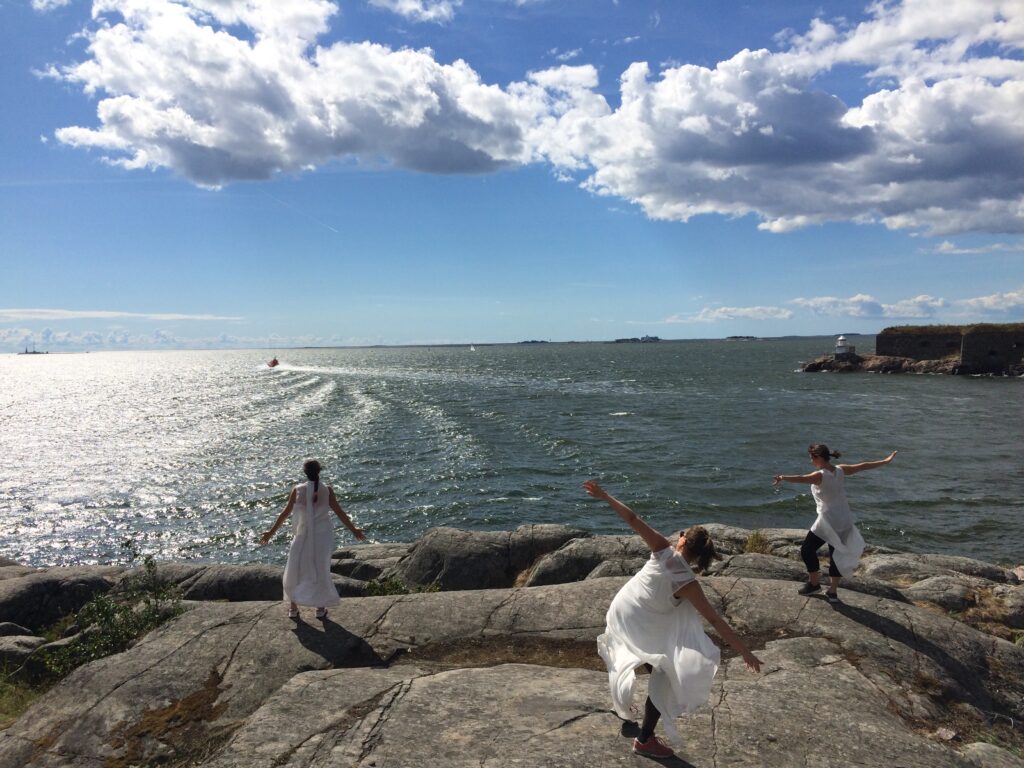 The story is about the encounter and friendship between Finnish Anna and Iraqi Ahmed, who came to Finland as a refugee. The performance creates interesting and realistic tension between different personal expectations and cultural misunderstandings of Anna and Ahmed. The premiere was at Teatteri Avoimet Ovet in Helsinki 2018. The performance was also seen at the Oulu Theater (2018) and the Finnish National Theater (2019). 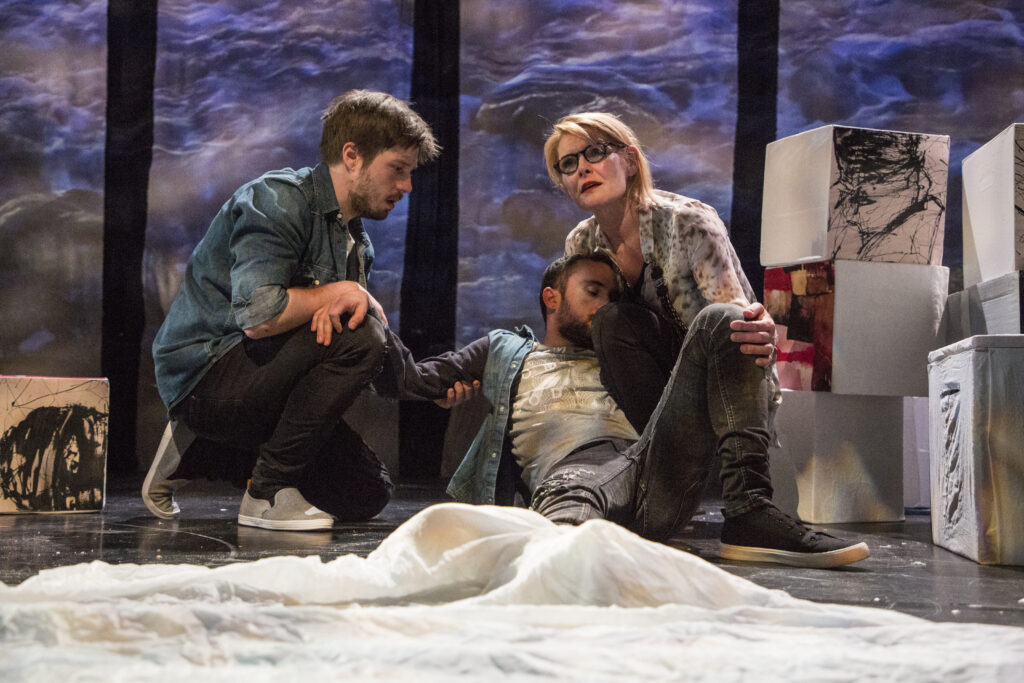 The Forest (Metsä) is a dance performance for a young audience. The Forest is a wondrous field trip, a song of praise to the Finnish forest. There is a special inflated tent, in which two performers, a dancer and a musician, bring the forest to life. With real forest textures, dance, music, shadows and lights, space and fragrances the young audience is called on an interactive journey. The Forest is aimed for 0–6 years old children with companions.

Part of the ticket income is donated to the Finnish Natural Heritage Foundation for protecting the old growth forests. 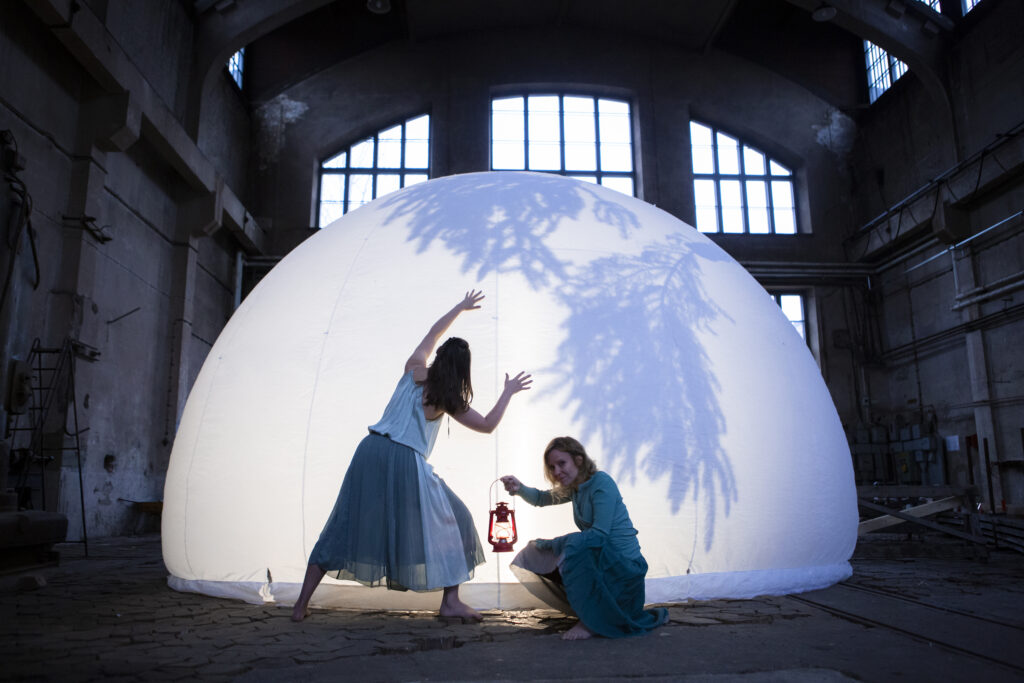 Forest Journey (Metsämatka) is a shared walk through the nature reserve Haltialanmetsä. Dance, song, and music entices you to stop and breathe together with the forest. What do the trees tell you? Where do their roots lead you? How does moist moss smell?

Forest Journey is a trip of experiences, in which the quiet walk becomes a choreography in itself and the participants are able to deepen their experiences through moments with each other. Forest Journey takes about 2 hours and is 3 km long.

Strong and Gentle is a joint dance and music performance for various generations. The work presents the experience of strength, gentleness, power, and fragility throughout one’s life – and its respective extremities. The premise is the sensorial experiences we all have from babies to old age. The performance is built between generations to enable them to enjoy it simultaneously.

Strong and Gentle – Age and Connection is a pilot project by Loiske Ensemble of OSIRIS Theatre. It is aimed at improving the wellbeing of the elderly and enhancing the encounters of various generations through means of art. The project will be carried out in three elements through music, dance, and togetherness. The workshops for Strong and Gentle started in the autumn of 2021 in North Carelia. The project is aimed at seniors living at home, the elderly who are cared for at home, people in nursing homes, the caregivers as well as the young families in the region.

Strong and Gentle – Age and Connection is one of the participants of the project Cultural Wellbeing. The project is supported by the Arts Promotion Centre Finland and funded by the Ministry of Health and Social Affairs. 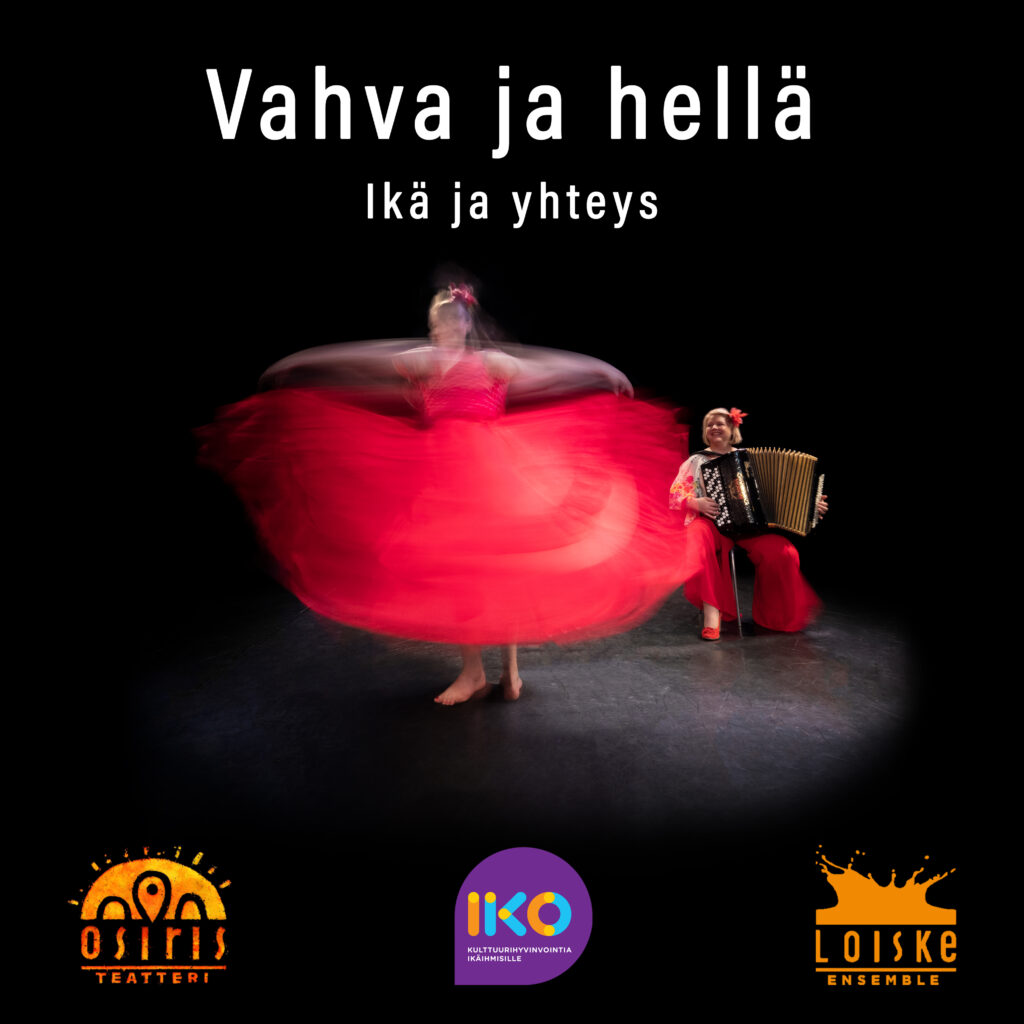 Woman in the Mirror – the project and the multitude of its performances are based on the voices of women who have found themselves in Finland, in the margins of society. The main characters from Afghanistan, Iraq, Morocco, Somalia and Russia encounter an artist from Osiris Theatre, previously unbeknown to them. The main characters use their own voices and only become visible through the art created by the artist. The encounters with the women create audio documentaries, sculptures, music and performance art.

Woman in the Mirror site 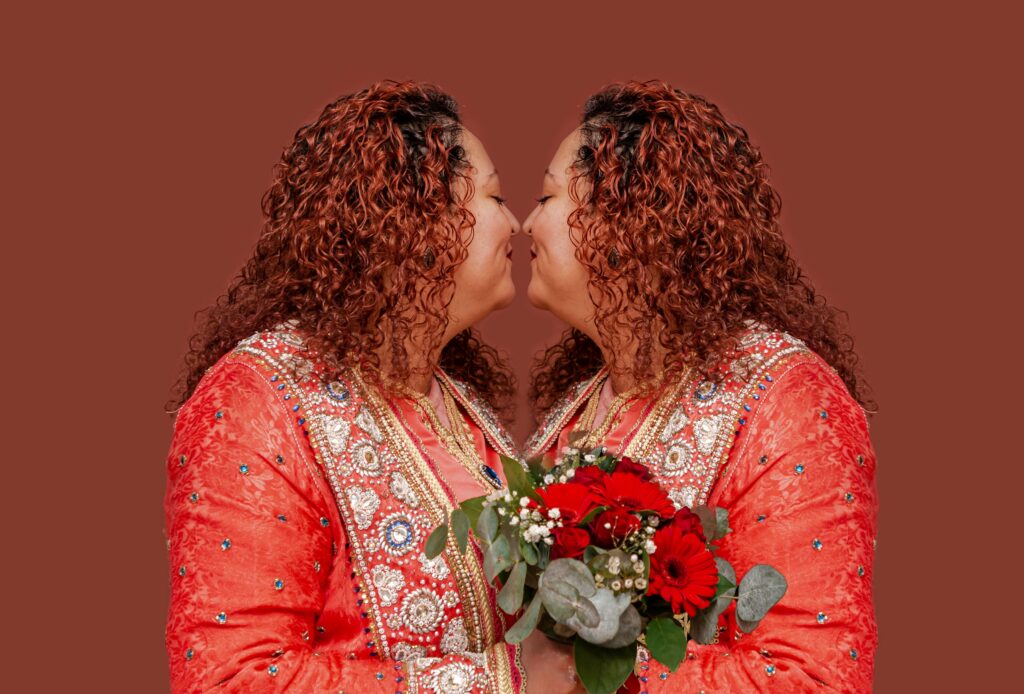 In the first phase of Woman in the Mirror -project, during the covid19 pandemic, the artists created audiodocuments about their main characters. The first documentary, including three short stories, was broadcasted by YLE Radio 1 and received tens of thousands listeners.

It can also be heard in Yle Areena HERE 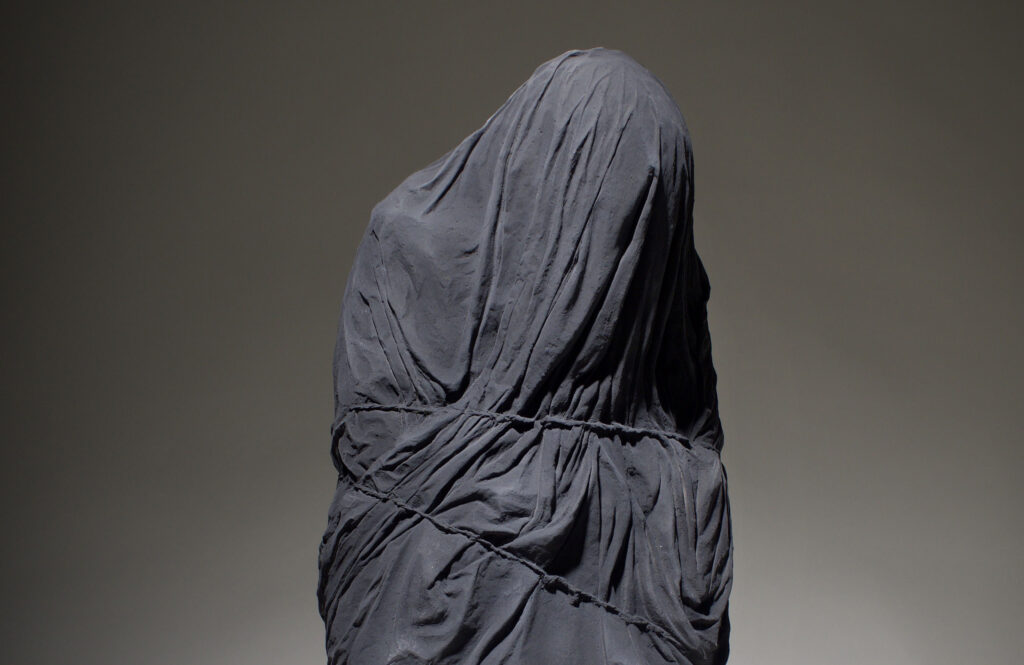